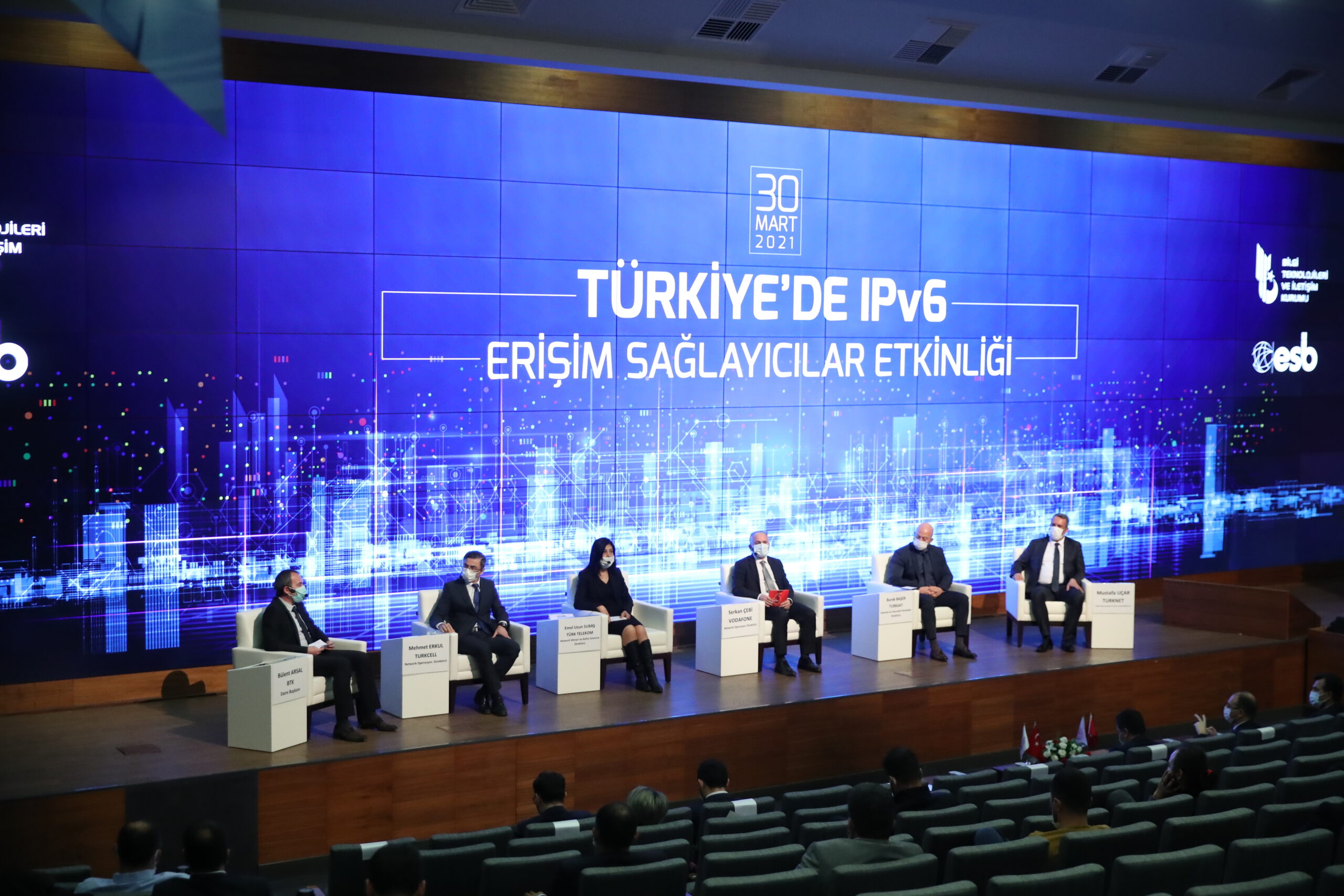 In the opening speech of the program, Ömer Faruk Sorgun, Secretary-General of the Access Providers Union, stated that the transition from the digitalized world to the digital world is accelerating. Sorgun, “We are now moving from the digitalized world to the digital world. Our transition to this digital world, which promises more comfort and convenience, has accelerated with the pandemic. From this day forward, it is unthinkable to think of an area where digitalization does not come into contact,” said in his remarks, and also mentioned the acceleration gained by the speed of digitalization and the contribution of the current pandemic process to this acceleration during his speech. Stressing that the work they have done and will do in the future as the Union is for Turkey and Turkish people, Sorgun said, “Our most important source of motivation is our people, to fulfill our responsibility properly.” Touching also to Turkey’s 2023 vision, Sorgun stated that we are very lucky now, because we have a president who values ​​both modern technologies and young people, making it easier to work in this field, and thus we are able to produce these technologies at a level that very few countries in the world have. Mentioning that we were able to make important developments such as the “National Technology Move” in this context, Sorgun, also offered special thanks to Ömer Fatih Sayan, Deputy Minister of the Ministry of Transport, and Ömer Abdullah Karagözoğlu, President of the Information Technologies and Communications Authority, who were among the participants for their working opportunities, cooperation, and support.

Ömer Fatih Sayan, Deputy Minister of the Ministry of Transport and Infrastructure, and Ömer Abdullah Karagözoğlu, President of the Information Technologies and Communications Authority (BTK), contributed to the event as speakers. At the opening of the program, where IPv6 should be used and its future, Deputy Minister of Transport and Infrastructure Dr. Ömer Fatih Sayan stated that IP has become a scarce resource today. Pointing out the reason for this as the development of technology, Sayan said, “The ability to access the Internet from anywhere at any time, the rapid development of IoT technology, the spread of internet-based services to the same extent as the use of mobile devices; It has also led to an increase in the provision of IP-based services and the demand for these services. Therefore, this increase has led to the exhaustion of IPv4 addresses.” Sayan emphasized that in order to adapt to these developments in the internet field and not to lag behind technology, the necessary measures should be taken as soon as possible for the transition of the existing telecommunication networks in our country to IPv6 and he added, “The transition to IPv6 is a necessity for our country to be a strong and leading country in its region, which has the world’s leading digital economy, can perform digital exports, and to ensure the development of domestic and national digital technologies. IPv6 transition studies should be carried out for non-governmental organizations to take a more active role in digital transformation, to make the internet ecosystem in our country more secure, to support the development of digital innovation culture, and to make our country a global player in line with the 2023 information society goals. In this direction; In recent years, our Information Technologies and Communication Institution has accelerated its efforts to increase the importance of IPv6, raise awareness about IPv6 and complete the transition of IPv6 in our country.”

Noting that a certain level of work was carried out within the scope of the Prime Ministry Circular published in 2010 to popularize the use of IPv6 in our country’s internet infrastructures, Sayan said, “It has emerged that our operators providing internet access services also need to start working on transitioning to IPv6. For this reason, we continue to work on determining the IPv6 transition strategy through meetings with our industry players. In this context; While studies are carried out to determine the state of the IPv6 infrastructures of the operators, to evaluate the plans for the transition to IPv6, to complete the necessary test studies before providing commercial services, our research on whether there is a need for additional legislation in this regard continues.” in his speech.

Sayan said that with the transition to the IPv6 protocol, new and much more different opportunities will emerge on the internet. “The sooner we complete the IPv6 transition as a country, the sooner we will discover these opportunities and start to benefit from them. On the other hand; Expanding the use of IPv6 is also important in terms of expanding the Internet of Things (IoT), 5G, and cloud computing services in our country. All stakeholders, especially public institutions, universities, internet service providers, the private sector, and R&D units, have a big role in the transition to IPv6 and the creation of new value-added services and products focused on IPv6 in our country. In this direction; First of all, we expect our internet access providers to plan their IPv6 transition work as soon as possible and to share their experiences and work in the IPv6 transition process with the industry regularly,” he added.

Ömer Abdullah Karagözoğlu, President of the Information Technologies and Communications Authority, also discussed the increase in internet use in the context of the pandemic. Emphasizing that there cannot be a life without the internet, Karagözoğlu said, “If we take a look at the ‘connection’ data in our country in terms of subscription and usage amount, we see that the number of broadband internet subscribers, which was around 6 million in 2008, has increased by nearly fourteen times and reached 82.4 million at the end of 2020. The rate of increase in the total number of internet subscribers in 2020 was 7.5% compared to the previous year. In the fourth quarter of 2020, the average monthly usage of fixed broadband internet subscribers was 178 GByte, the average monthly usage of mobile broadband internet subscribers was 9.9 GByte, and the data usage of 4.5G subscribers whose device and SIM card are suitable for 4.5G service was 11.6 GByte. In the last quarter of 2020, while the fixed broadband prevalence rate by population was 20%, the mobile broadband prevalence rate was 78.5%. All these indicators reveal that our country is more ‘connected’ in harmony with the world in general.”

Expressing that it is very important to ensure the continuity of the Internet, Karagözoğlu said, “The RIPE Network Coordination Center (RIPE NCC), which serves as the Regional Internet Registry Agency in the regions of Europe, Central Asia and the Middle East, including our country, is responsible for the allocation of IPv4 and IPv6 and the distribution of internet resources. In 2012, he announced that the last /8 IPv4 block had been exhausted. RIPE NCC announced in November 2019 that /22 IPv4 blocks are also exhausted, and IPv4 address blocks that can be returned by various organizations in the future can only be allocated according to waiting lists,” in his remarks.

Reminding that ISPs are carrying out studies at various levels for the transition to IPv6 all over the world as the acquisition of IPv4 becomes increasingly difficult, Karagözoğlu ended his speech saying, “Considering the problems to be experienced during the transition to IPv6, the work done so far for the transition to IPV6 will be increased and more time and resources will be needed. important steps must be taken in the transition process. In this context, we notified the ISPs about the transition calendar we prepared as the Institution. Compliance with this calendar is of great importance for IPv6 transition studies. Another issue that has come to the fore with the initiation of the transition to IPv6 is cyber security. Organizations, large or small, around the world are constantly exposed to cyberattacks and data breaches. Being aware of this, we strive to ensure that cyber security risks are kept at a manageable and controllable level in our country. The basis of our work is to be prepared for cyber incidents by managing the risks brought by the Internet with a holistic approach involving all stakeholders and to ensure continuity by getting out of these incidents with the least damage. In this sense, Turkey has come a long way with the work of our Ministry and Institution. While our institution fulfills its duties in a regulatory sense for the electronic communication sector in our country, on the other hand, it continues its activities to ensure national cyber security in accordance with the duties and responsibilities assigned to it.”